For many critically ill humans with terminal organ damage, transplantation is the only survival possibility or the only way to improve their quality of life. However, the availability of human donor organs is not only limited in Germany but worldwide. According to the German Organ Transplantation Foundation (DSO), more than 10,000 people are currently in need of a donor organ. And in 2015, only 1,637 transplantations were performed. The average waiting time for a kidney can be four to eight years, and about 17 percent of the patients who depend on a donor heart, do not survive the waiting period.

In order to counteract donor deficits, research for alternatives is of the utmost importance. Xenotransplantation (xenos = from the Greek meaning “foreign”) is one of the possibilities: For these transplantations, tissues or organs from phylogenetically distant species (for example from a pig) are transferred to primates (rhesus monkeys, baboons, later humans). The advantages lie within the anatomical and physiological similarities of the tissues and organs of pigs and primates.

Since 2012, the DPZ has been involved in the DFG funded SFB Transregio 127 collaborative project. The project is dedicated to xenotransplantation research. In the interdisciplinary project, numerous experts work together on tissue and organ replacement procedures and take these from the laboratory to the clinical application. Bruno Reichart is a cardiac surgeon, retired professor of the University of Munich and one of the two spokespersons of the research collaboration. In 1983 he performed the first cardiopulmonary transplantation in Germany and is therefore also known as a pioneer. Since 1981, he has been actively involved in xenotransplantation research.

In the following interview, he discusses the possibilities of xenotransplantation, the research project SFB Transregio 127 as well as the vital role of the DPZ in the consortium.

An interview with Bruno Reichart: „We need an alternative for the donor deficit”

What is xenotransplantation and why is it so important in the research for alternative organ replacement methods?

In order to offer an alternative to the serious heart donor deficit in humans, this research has taken on a new importance. In general: "cardiac death" is the number one cause of fatalities in the western world and also in Germany. Dying under such conditions is horrifying since you are usually fully conscious and then you slowly suffocate. Due to the lack of donor organs, not too many heart transplants have occurred lately. However, heart transplantation is the method of choice that results in this cul-de-sac.

Diabetics that have difficulties with the adjustment, can potentially be threatened with fatal hypoglycaemia. A transplantation of human insulin-producing pancreas cells is practically unavailable to the extent that it is required and would be the best alternative.

The replacement of heart valves in children and young adults is usually not a problem-free procedure. The mechanical prostheses require so-called "blood thinners", such as Marcumar. Up to now, biological valves degenerate too fast and had to be replaced after a short period of time. In contrast, genetically modified heart valves from pigs are durable and do not need any blood-thinning medication.

What are the opportunities and risks that xenotransplantation harbors for medicine?

As already mentioned, this leads to the possibility of eradicating the lack of cardiac donors, to help the patients with heart valve problems and diabetics. Risks: There is a risk of the transmission of disease-causing germs. The donor animals must therefore undergo thorough preliminary examinations. By the way, the risk of germ transmission is far greater during the transplantation of human organs, because they take place under enormous time pressure without thorough preliminary examinations.

Numerous experts of the DFG Collaborative Research Project SFB Transregio 127, have conducted research on xenogeneic cells, tissue and organ transplantation since 2012. What is the aim of the project?

The aim of the DFG SFB Transregio 127 is to demonstrate the safety and effectiveness of xenogeneic interventions for non-human primates in pre-clinical trials. There are no alternatives to these experiments.

What are the main research areas in the joint project?

The subtitle of our project is "From bench to bedside". For this, one needs basic researchers in immunology, virology, veterinary medicine but we must not forget to include ethicists and lawyers. 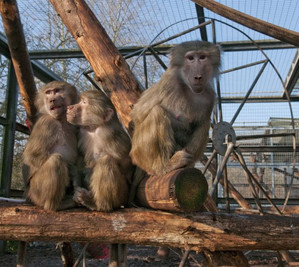 In addition to the already mentioned heart transplants, scientists from our consortium also dealt with the transplantation of pancreatic cells, the insulin-producing so-called "islands". This can help the approximately five percent of all diabetics, including children and adolescents who are unable to cope with a drug therapy.

Why are pigs particularly suitable for the transfer of organs to humans?

For thousands of years, pigs have served as a food source. They multiply within a short period of time. Pig organs and tissues are well-suited for humans, because of their anatomical and physiological similarities to humans.

What are the available methods to prevent the rejection of organs during the transplantation of foreign bodies?

We have developed methods for the suppression of the immune system that are superior to allogeneic methods (i.e., human-to-human transplantation). Through the elimination of certain porcine genes (and thus removing harmful proteins) and through the protective insertion of human genes, rejection reactions are prevented. Less immunosuppressive drugs are needed.

An exception must be mentioned: Small cell clusters, such as the insulin-producing cells of the pancreas, could be encapsulated. The capsules protect against rejection reactions. Under these conditions no genetic modification must be present and an immuno-suppressor becomes superfluous.

What is the role of the DPZ within the consortium?

The DPZ has an enormously important task. It not only provides the animals for the difficult transplants but also helps to make simple technical procedures with tissues - for example, insulin-producing pancreatic cells. The animals are trained and the follow-up care, which is not easy, takes place at the DPZ. The heart transplants are performed in Munich.

Why are primate animal models vital for transplantation research?

Primate experiments as animal models are extremely rare. In these particular cases of xenotransplantation, non-human primates are necessary because models that are as close as possible to humans are needed.

An alternative the use of non-human primates would be to use humans for the experiments. This was actually tried in the previous century, but for ethical reasons, it is not common practice nowadays.

How do you tackle the ethical and legal challenges that arise from the use of animal tissues and organs in the research collaboration?

On our central project we have a Catholic ethicist, a clinical ethicist, and a law expert. All are well versed in questions concerning transplantation. They deal with the relevant scientific questions such as designing the comprehensive information sheet for future clinical applications.

Citizens are also consulted and public symposia on the implications of the religious beliefs of Jews and Muslims are held.

What are the research successes?

Currently, the non-genetically modified, encapsulated pancreatic cells of the Dresden research group is the most advanced research. They have concluded their pre-clinical study of non-human primates and are in the midst of evaluating its effectiveness. A clinical trial could be completed within the next four years. Preclinical studies with genetically modified heart valves of pigs as well as with modified pancreatic cells will soon begin. Genetically modified pig hearts have successfully replaced non-human primate hearts with clinical certainty. A constant long period of survival is the current aim.

Information on xenotransplantation from the World Health Organization