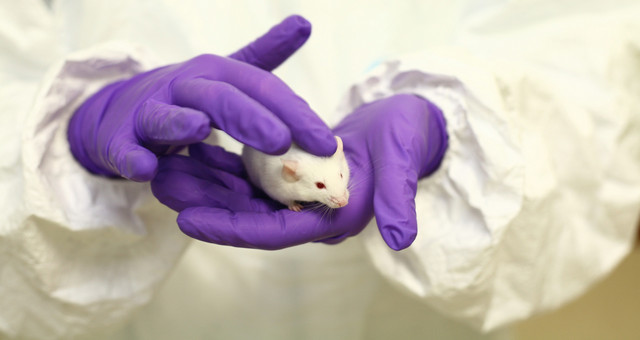 The three words "replace", "reduce" and "refine" describe the most important ethical principles in experimental scientific work with laboratory animals. The so-called "3Rs" are intended to limit the number of animals used in experiments, replace animal experiments with alternatives and reduce the burden on animals to an indispensable level.

The "3Rs principle" goes back to the British zoologist William Russel and the microbiologist Rex Burch. In 1959, they formulated their concept for research that conformed to animal welfare and was justified from an ethical point of view in the book "The Principles of Humane Experimental Technique".

Today, the 3Rs principle is the basis for animal welfare policy and the practice of modern research approaches involving laboratory animals. It is the prerequisite for the official approval of animal experiments and also forms the basis of the EU Animal Welfare Directive 2010/63/EU of 2010 (Article 4: "Principle of prevention, reduction and improvement of animal experiments"). In 2013, the provisions of the EU Directive and thus also the 3Rs principle were transposed into German law with the amended Animal Welfare Act and the Animal Welfare Laboratory Animal Regulation.

As far as possible, animal experiments should be replaced by alternative methods. All scientists are obliged to check in advance whether it is sufficient to use cell cultures, computer simulations or imaging methods to answer their questions. "Replace" also means replacing more highly developed animals by less highly developed and therefore less sufferable animals. This means, for example, working with microorganisms, reptiles, amphibians or invertebrates such as fruit flies instead of rabbits, dogs or monkeys.

All researchers who work with animals are encouraged to reduce animal testing and the number of animals used in experiments to a necessary minimum. This is achieved, for example, through statistical and methodological optimization, selection of suitable animals, good coordination between scientists to avoid repetition of similar experiments, coordination of different research projects and sharing of data and tissues from animals.

Refine means refining the test methods in such a way that the burden on the animals is reduced to a minimum, for example through the use of anesthetics, narcotics or painkillers. Training the animals and thus slowly getting used to the experiments and examination equipment also helps to avoid stress. In addition, animal-friendly husbandry and professional competence of the persons handling the animals promote the welfare of the laboratory animals.

The scientists at the DPZ have undertaken to conduct their research on and with non-human primates in compliance with animal welfare regulations on the basis of the "3R principle". In doing so, they are aware of the great obligation they have for the welfare of the animals entrusted to them and for the expert performance of the experiment. For the scientists at the DPZ, a fourth "R" therefore still applies, which stands for the responsibility that all persons involved in the experiment have towards the animals.

This two videos explain the 3Rs principle and show examples how researchers implement the ethical guidelines.